Sexual Fantasies that Women Crave For

Women always crave for sexual fantasies, some never ever had the opportunity to experience it while others who are smarter and more active have been able to experience it. According to a study that got published in the Journal of Sexual Medicine, the researchers who lead the study interviewed women between the ages of 20 – 40 living in the province of Quebec in Canada. They discovered the below female sexual fantasies, these fantasies can be traced back to evolution and years of existence. More about fantasy and evolution can be read on a book by Emily Dubberly titled Garden of Desires: The Evolution of Women’s Sexual Fantasies. Learn more on the other article that inspired this article: Female Sexual Fantasy.

Below is the graph of the most common female sexual fantasies. 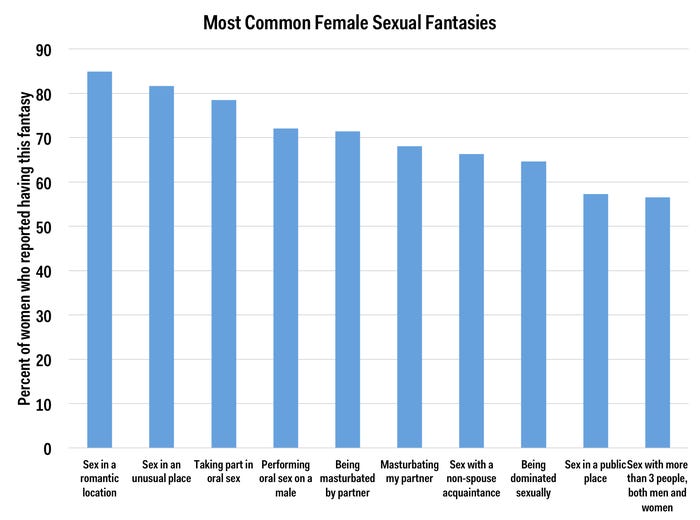 Sex in a romantic or unique location is still one of the most popular fantasies. Example would be sex on an island while the sun is busy setting. These days sexual submission is becoming more popular, as you see on the roads while driving to work all these sex shops started trading after the release of Fifty Shades of Grey by E L James. It has been reported that women having fantasies that involved sexual submission are more satisfied than their female competitors without it. Both men and women who are more open in their relationship live a long and happy life together.